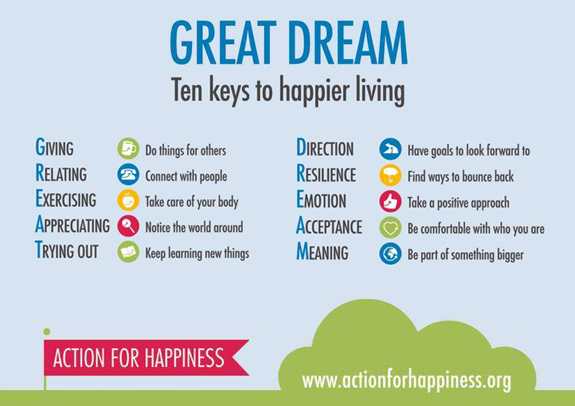 Recently, I went to a talk entitled Exercise and Happiness organised by Action for Happiness in Brighton.

Exercise is part of Action for Happiness’ 10 Keys for Happier Living and as I’m an advocate of exercise as part of everyone’s Wellbeing I wanted to attend and to hear what others have to say on the topic .

The talk was given by Jörg Huber, Professor of Health Sciences at the University of Brighton.

The talk started by putting forward concepts of “Happy” in a general sense. Jörg rekindled a couple of basic definitions of happiness:

Many people know of hedonism in its many pleasurable senses but it was a nice reminder to hear of eudaimonic happiness for its encapsulation of ownership, growth and mastery of self.

The Changing Face of Happiness

Happiness is a complex state (I’ll come back to this point at the end).

The usual definition of happiness is the absence of depression, anxiety or distress.

Today the concept of happiness is changing.

The current interpretation is that happiness is about understanding the difference between positive and negative feelings, scaling experiences, while being mindful and acceptant of the spectrum we each experience. Learning to embrace the good times and understanding the bad ones and how to work through them.

Interestingly and thankfully, most people report feeling happy most of the time.

The Office of National Statistics now tracks Happiness/Wellbeing. You may well have heard about this over the last couple of years. Bhutan was a leader in this approach and monitors levels of happiness alongside other growth markers such as GDP. When traditional markers of success are usually material there is much to be said about the wider context of what constitutes happiness.

Several Life Satisfaction scores were shown from across the UK. On a general happiness rating this ranges between 30.4%-33%. The southeast had the highest score at 33%. London’s score was 30.4%.

Reasons weren’t given as to why these scores are what they are but it did allow for points to be raised about work-life balance, environment, etc. I need also to understand how this equates to most most people feeling happy most of the time.

In another set of scores in relation to exercise or regular activities:

These scores showed a general trend that people who regularly do some form or exercise or activity are markedly happier than those who do not. Yet in the words of Paul Daniel, by “not a lot!”

Participants of exercise or regular activities trend a slightly higher happiness score than those who do not. An interesting and thought provoking point. Which way does it work?

People who do activities outdoors report a more positive effect on their wellbeing compared with those who undertake activities in an urban/indoors environment. It was also reported that people who do exercise outdoors return to that exercise more regularly.

Interestingly, as part of the same study the level of UV light was measured. The UV levels were higher in outdoor environments. It could be that higher levels of UV help us to feel better.

As part of that discussion, activities such as walking in nature are shown to reduce rumination. When you go out for that walk to clear your head now you know why you feel better when you come back!

Exercise & People over 65yo

This message is not pushed hard enough by GPs.

The Role of Breakfast

In itself a regular and healthy breakfast does not influence activity levels or weight management.

Our heart rate will rise slightly after eating in response to metabolising food but in itself will not  “burn extra calories”.

And so the questions were:

Weight loss alone may not be the answer to long term health.

Therefore, levels of fitness are relevant when considering lowering morbidity risks associated with being overweight. Don’t focus on the figure. Focus on the fitness.

The important thing is to be active. It can be exercise, sport or an outdoor activity such as gardening, walking, etc.

As an aside (as part of a separate talk I attended recently) we hear of the rise of sedentary habits (sitting for longer periods, etc). By being less sedentary we could be doing our fitness levels and overall longer term health a huge favour.

An interesting point which referenced its inclusion in high performance sport.

An awareness by an individual of what they are doing, where they are at and what else needs to be done. Importantly, the awareness is not bound by emotion. It is about non-judgmental observation.

When communicating with people who are above “normal” weight there are two considerations:

Illustrated by The Marshmallow Test

The message in the adorable Marshmallow Test is that people employ different methods of self regulation when it comes to achieving shorter or longer term goals.

Do we need rewards now or can you postpone the near-term gain for greater rewards further down the line?

There has been a trend in governmental policy toward nudging people to make better health choices.

Much of this emanates from Nudge: Improving Decisions About Health, Wealth and Happiness by Thaler and Sunstein

By nudging people to make better health choices the aim is to increase engagement and self-improvement. Perceived nagging shuts people off from the message and often disengages.

Finding Flow is a longtime favourite of mine and it was nice to hear its relevance within exercise and happiness.

Finding Flow is attributed to Mihaly Csikszentmihaly (one day I will be able to pronounce his name!). He states that being immersed in a challenging situation creates a sense of flow where skills are put to good use. That combination of skillset and challenge allows us flourish.

In this context, what do you enjoy as exercise yet feel challenged by it in such as way that you feel that you are developing?

Here’s a TED Talk by the man himself…

Wrapping Up The Talk 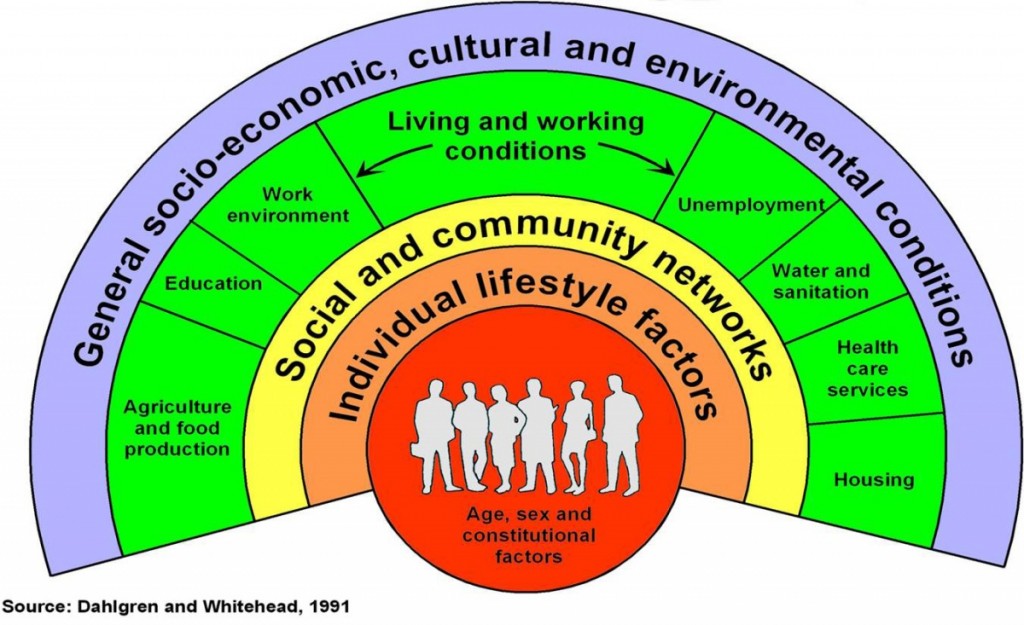 In wrapping up the talk Jörg Huber showed this slide which highlights the many influences and factors around health. This model was created by Dahlgren & Whitehead.

At both policy making and personal levels there is much food for thought here.

It serves as a good reminder that there are many determinants around health; social, cultural, environmental, education, food sources, living conditions, working conditions, as well as the many personal factors.

What I Have Taken Away from the Talk

Given the variety of topics covered in the talk and with a little more insight into the various factors that contribute to our overall health I’ve come away with the following: